A large chemical plant found that the two float flowmeters installed on the Yin and Yang pipelines were not working properly, and the pointers were always swinging and could not be read;

1.According to on-site observation and analysis, it is concluded that the measured media in the Yin and Yang pipelines are gas-liquid two-phase media that are uneven, unfixed proportioned; while the flowmeter is a conventional float flowmeter.

One of the working principles of the float flowmeter is the law of buoyancy, which is related to the density of the measured medium. When the density is unstable, the float will jump. Because the liquid in this working condition is accompanied by an indefinite amount of gas, a dynamic flow is generated, which leads to the above phenomenon of the flowmeter.

2.Settle the plan
The flowmeter itself can effectively buffer and reduce the violent fluctuations caused by the randomly generated gas to achieve a reading that can be regarded as a stable value, and the fluctuation of the output current signal meets the requirements of the regulation system. According to the above requirements, the electromagnetic flowmeter, turbine flowmeter, vortex flowmeter, float flowmeter, and differential pressure flowmeter are analyzed. After the comparison, it is considered that only the necessary improvements to the metal tube float flowmeter are feasible.

3 Implementation of special design
3.1 Guarantee the stability of the flowmeter under working conditions.
As far as the flowmeter itself is concerned, a common and effective measure to overcome fluctuations is to install a damper. Dampers are generally divided into mechanical and electrical (magnetic) types. Obviously, the float flowmeter should be considered first one. Since gas has been generated and exists in this application object and the fluctuation range of the float is not very severe, a piston-type gas damper can be used.

3.2 Laboratory test verification
In order to preliminarily verify the effect of this damper, based on the actual measured size of the inner diameter of the damping tube, 4 sets of damping heads with different outer diameters have been refined, so that the matching gaps are 0.8mm, 0.6mm, 0.4mm and 0.2mm respectively. Load a specially designed float flowmeter for testing. During the test, air is naturally stored at the top of the flowmeter as a damping medium.

The results of the test shows that the two dampers have higher effects.
Therefore, it can be considered that this kind of float flowmeter with damper is one of the feasible methods to solve similar two-phase flow measurement, and it can be used in the process of ion-exchange membrane caustic soda. 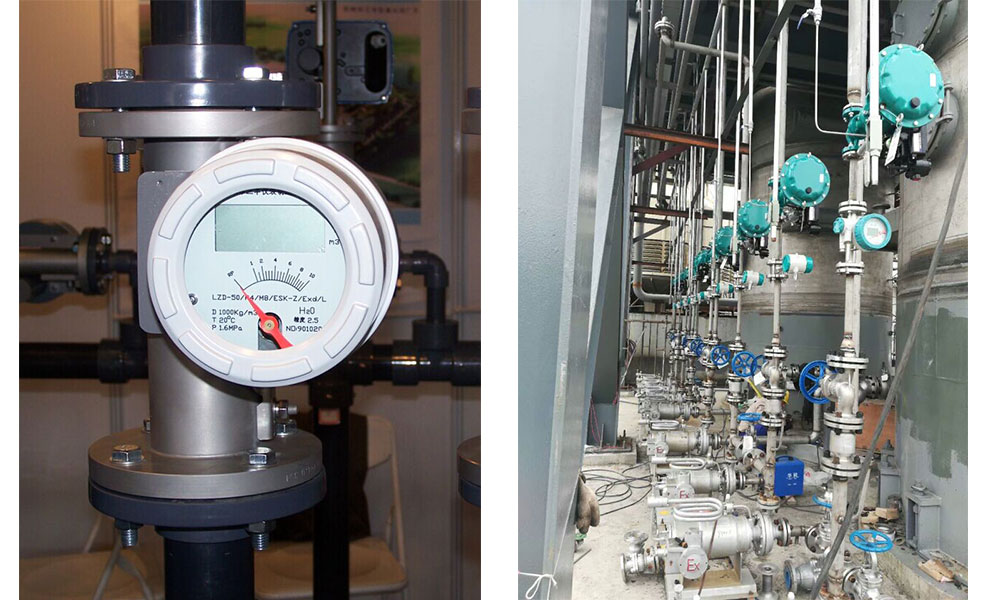 Send Your Inquiry
Exported to more than 150 countries around the globe, 10000 sets/month production capacity!